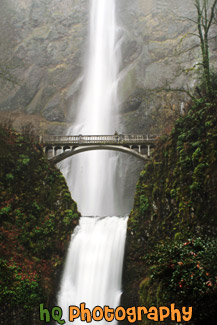 Multnomah Falls is one of the most popular waterfalls in Northern Oregon State. It is located along the Columbia Gorge area of Oregon where there are over 77 waterfalls on the Oregon side of the Columbia River. This is a great area to visit waterfalls because all 77 of these waterfalls are within 15 miles of each other!

Multnomah Falls is located on Larch Mountain and plummets 620 feet. It is the 2nd highest year-round waterfall in the United States. The flow of the waterfall is usually highest during the spring and winter seasons. This photo of Multnomah Falls that you see to the left was taken during January so the water flow was pretty high. As you can also see in this photo, there is a bridge in front of the falls in which people may hike up to and continue hiking on a trail that reaches the top of the falls.

Some posts on this site may contain affiliate links for which I receive a commission at no extra cost to you. I only affiliate products in which I believe are beneficial and are of great value.