On the Big Island in Hawaii, you will find this black sand beach. I love the contrast in this picture with the blue sky, green palm trees, and black sand. According to Wikipedia black sand is formed by “Lava, erupting onto a shallow seafloor or flowing into the sea from land, may cool so rapidly that it shatters into sand and rubble. The result is the production of huge amounts of fragmental volcanic debris. The famous ‘black sand’ beaches of Hawaii, such as Punaluu Black Sand Beach, were created virtually instantaneously by the violent interaction between hot lava and seawater.”

I believe we were at the Punaluu Black Sand Beach in this photo. It was strange to see black sand as this was my first time seeing it. Not seen in this photo was a giant see turtle that was coming to shore. That was another site to see!

My husband and I were on our honeymoon on the Big Island of Hawaii when I took this photo. We got married in Kauai and took a short flight to the Big Island afterwards.

Check out more photos of Hawaii that I photographed while we were there from my other website, HQ Photography! 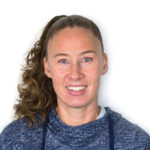 I started out using 35mm point and shoot cameras, then upgraded to a 35mm DSL camera, and then finally came the world of digital DSL cameras. Gone are the days of having to wait for your film to be developed to see what you captured. Photography has never been so much fun!